The Margos are feeling poetic in this play vs movie combo that is a tale of love, bravery, and wit. The original play of Cyrano de Bergerac was written by Edmond Rostand in 1897 and has been adapted several times over the last 120 years. Mel Ferrer was the most famous/acclaimed Cyrano in the 1950s but Steve Martin’s C.D. Bales gives his own take on one of the oddest romantic leads we have covered.

In the original play, (based on a real-life person) was written in verse and tells the story about de Bergerac who was a cadet in the French Army. He is a smart and gifted warrior but has an extremely large nose which makes him feel insecure. It takes place in 1640s Paris and the object of de Bergerac’s affection is his cousin Roxanne who is known for her beauty and intelligence. He thinks he has no chance for love from an ugly woman much less a beauty like Roxanne.

Christian de Neuvillette, a young, handsome new cadet also has his eye on Roxanne. She wants to date him but he is insecure about his lack of brains. De Bergerac agrees to write the love letters on behalf of Christian to Roxanne while he is sent away to war.

There is also a Count de Guiche who wants Roxanne to marry the Viscount Valvert. It’s all sorts of complicated but Roxanne tries to save Christian and de Begerac’s lives but having them not fight on the front lines against Spain.

De Bergerac tries to get Christian to speak to Roxanne the words he writes for him but he refuses and instead speaks off the top of his head. Bad idea. De Bergerac tries to help by speaking in the safety of night to her. Roxanne swoons and she and Christian are secretly married. A jealous de Guiche sends both de Bergerac and Christian to war where they are starving until Roxanne uses her feminine wiles to the front lives and provide them food & drink.

De Bergerac almost tells Roxanne that he was writing the letters all of this time until Christian unexpectedly dies. He keeps that secret and 15 years later he meets up with Roxanne who is staying at a convent. Someone drops a log on his head and he heads towards Roxanne he reads one of “Cristian’s” last letters to her. She realizes it was him all of this time. Rozanne tells him she loves him and he does with “panache.”

Steve Martin took this material and wrote the screenplay for Roxanne in 1987. Set in Northern Washington. C.D. Bales (Martin) heads up the local fire department and is loved by most people of the town. Sometimes he runs into men who are bullies but he can usually outwit and beat them. He has a crew of firefighters who are misfits and provide many laughs in the film.

Our Roxanne here is played by Daryl Hannah and she is an astronomist who is spending the summer looking for a comet. C.D. falls in love at first sight but she has a thing for the newbie in town Chris (played by 80s stalwart Rick Rossovich.)

Hilarity ensures and if you are not even slightly charmed by this film–you have no soul!

Between the play and film–which did the Margos like better? 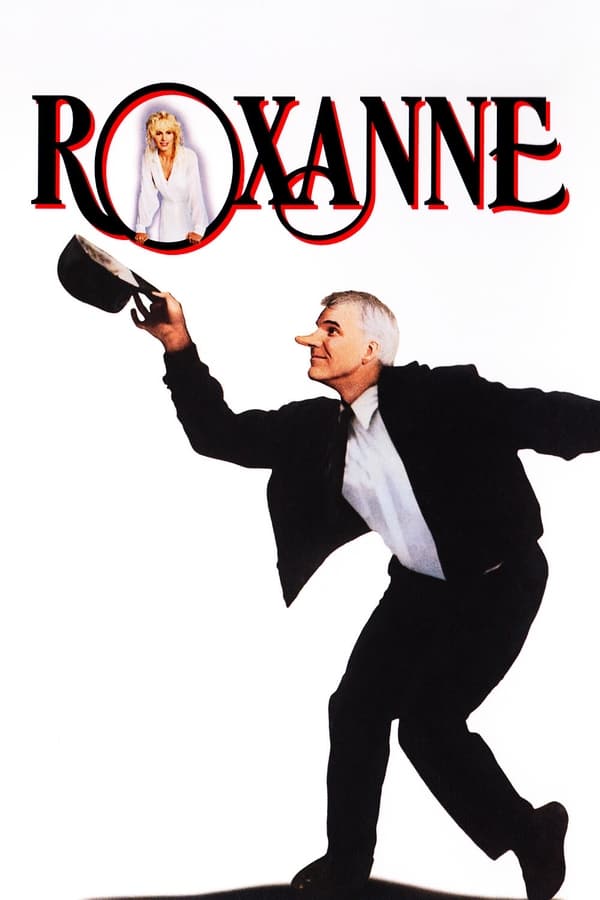 Based on the play 'Cyrano de Bergerac', large-nosed C.D. Bales falls for the beautiful Roxanne—while she falls for his personality but another man's looks.